Over the last few years I have got into the habit of taking a day off work for my birthday. This then would be an occasion for a day’s gaming with one or two good friends. Nothing too serious; just a friendly game with an interval for a pint and a bite to eat. Obviously, this wasn’t possible this year but I thought I’d take the day off anyway and put on a solo game.

This year’s game was to be Bloody Barons 2. I played this using my 10mm WOTR collection and the game looked splendid. Unfortunately, big battles in this scale aren’t very photogenic. So, although I took plenty of photos, I never got around to writing up the game. However, I realised that I hadn’t properly chronicled the renovation of my 10mm collection, so I thought I’d take a few close ups of the figures instead.

One of the problems with my old collection was that it was difficult to tell the difference between bow and bill at wargaming distances. Hence, this time around, I was determined to make this aspect more obvious.

For mounted troops, the rules only distinguish retinue and household; it is easy to distinguish the two by using appropriate figures’ household having more heavily armoured types.

Each army requires 3 generals. Strictly these should be on the same size bases as the troops but I went for circular bases to make them more distinctive.

Bloody Barons doesn’t include any specific rules for Scots but as I had the figures I just created my own version. I had enough figures for two units of Scots spearmen and a unit of Highlanders. The spearmen I count as retinue but with no missile capability; they also get to use the spear / pike rules. The highland troops do contain archers but count as levy.

Similarly, for the Irish, I have two units of mixed galloglaich and bonnachts. These I count as retinue with no missile capability. They are supported by three bases of kern, which use the handgunner rules.

With the armies now assembled, I now needed a few markers. First off, I needed a marker for unit status. For this, Bloody Barons only recognises two 'formations'  - 'in order' and 'out of order'. These are more like morale states than formations and I have substituted the terms 'arrayed' and disarrayed'. In the rules arrayed troops are shown by 4 bases, side by side, in line (all units consist of 4 bases). Disarrayed troops are shown by arranging the bases with a 2 base frontage - i.e. in 2 lines. I did away with this for two reasons. Firstly, I use units of 8 bases; losses are in 8 increments anyway, I had the figures available plus the bigger units look better. Arranging these on a 2 base frontage resulted in a long column that was awkward to fit in the table space and frankly looked a bit daft. Secondly, units can move between the two states of arrayed and disarrayed quite frequently and it was somewhat of a faff to keep rearranging the bases. Instead I opted to create a small base of archers which would be placed in front of the unit to represent the disorder of troops stepping out of line.

The last marker I needed was a way to show units that were low on arrows. I already had 'extra arrow' markers from my Bloody Barons v1 set up , which could be pressed into service. An alternative is to simply place the archer bases behind the bill, showing the archers withdrawing through lack of arrows.

As mentioned above, the photos of the game weren't great so I won't go into detail this time but rather show just a couple of snaps. Although, the game is designed for  4 foot by 3 foot table I decided to try out a full 6 by 4 table. To my mind the larger table looks much better and it's not necessary to squeeze units into a zone. Still it's nice to have the option to play on a smaller table.

All in all I had a great game, even if it did feel a bit weird in lockdown. Not a patch on a game and a pint with your pals though. Maybe next year!

Early in 1990 the Committee of the Marshal Petain Gentlemen's Club met to dispute Gaul with its long-term ruler and Celt fan Lardgetorix.  The Roman war machine would be captained by Quintus Whitmorus, the noblest Roman, and by Hasdribble Parka our resident Carthaginian.

I recorded the games despite the consumption of a quantity of "Hungarian Bulls Blood" a drink that purported to be a wine, but was in fact some type of poison.

The record shows a few games, rare for WRG 7th, our rules of choice at that time.  By 1990 we had been fighting Roman vs Carthaginian vs Gaul since the 1970s, and this was one of our last great WRG form not function games before moving on to the devil's work of DBA and it's heresies.

One of my enemies was to yak the role of cotta, one Sabienus.  Several rhymes were constructed in the form of authentic Roman poetry, and at least one of these began "There once was s man called Sabienus."  Thankfully these did not survive history.

The games here are the record of Saturday.  On Sunday, hungover, we used Phil Barker's full setup rules, which included an attempt ata  pre battle phase.  On their home ground, with a huge cavalry advantage the Celts were "ambushed on the march" by the Romans, deploying in Column and marching into a suicidal position.  It was so pointless, so infuriatingly Barkerese, and such a non game, that I switched to Colonials for future gaming and abandoned WRG in a fit of "teddy out of the pram."

That was a pity since I now consider WRG 7th a failed masterpiece.  The use of elements, and fatigue points, march moves and tactical was a pointer to how things would eventually develop.  Just a pity it was written as a legal contract in legal terms to combat competition gamers rules stretch. 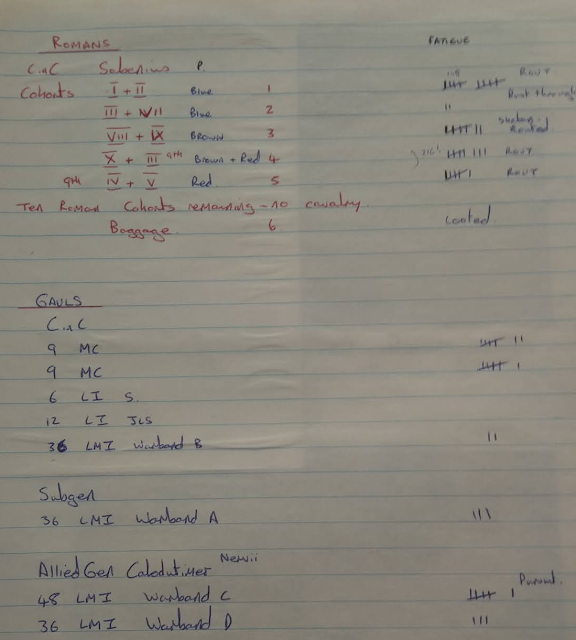 The Weekly game of Gulf Strike is on hold as we turn to Sam Mustapha's Rommel.  It`s Normandy and the Germans are counter attacking near Mortain, whilst the US 30th Infantry with supporting units are attempting to drive them back.  This is an encounter game. 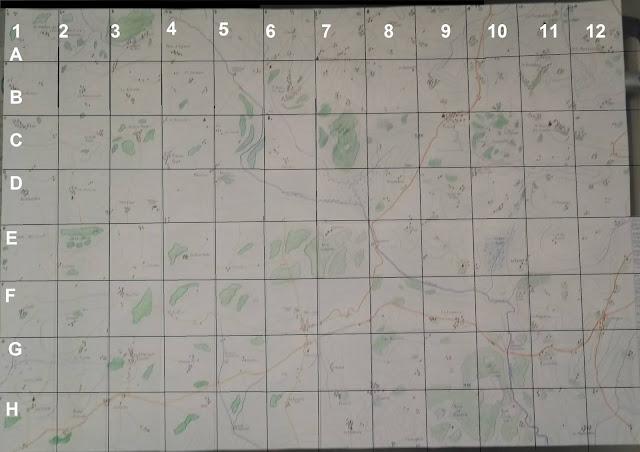 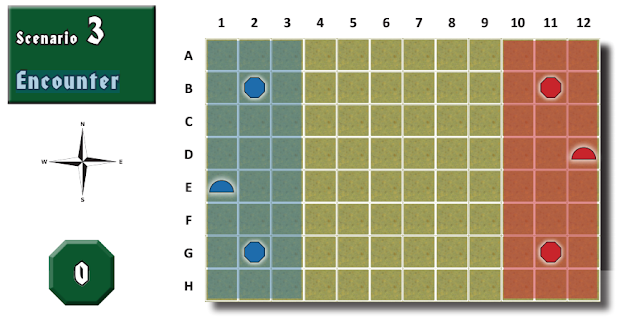 Set Up
One player rolls a die. If he rolls an even number, he sets up his starting force first. If he rolls an odd number, his opponent does.  The grid is used to set up.   After the second player sets up his starting force, all units are revealed on camera.
Each side starts with 4 Ops. Roll a die to determine who has the first turn.
Basic Length: 12 turns.
Victory Conditions
When nightfall occurs, if one player holds any three objectives, he wins. Otherwise the game is a draw. Note that in this scenario it is possible for each side to take the other two objectives, resulting in a strange and unlikely, but possible draw.
Reinforcements
Before setting up, each player must divide his army into two groups, in a way so that one group is not more than four units larger than the other group. He designates one of them as his starting group, and the other as his reinforcement group.
In his marker step each turn, the active player rolls one dice. If the dice is equal to or less than the number of the turn just played, then his reinforcement group has arrived. There is no roll on the first turn.  Reinforcements may be placed in any square of a player's setup area that has an outside edge. 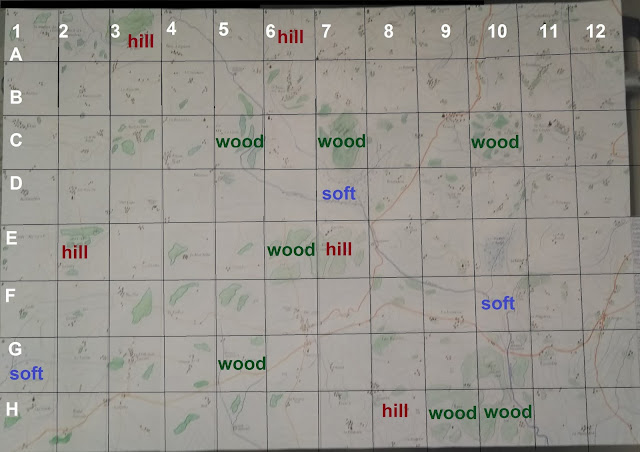 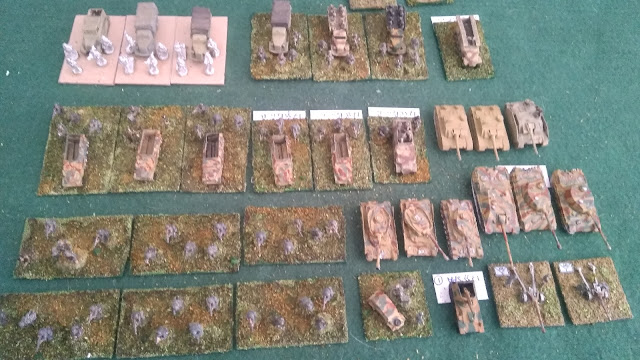 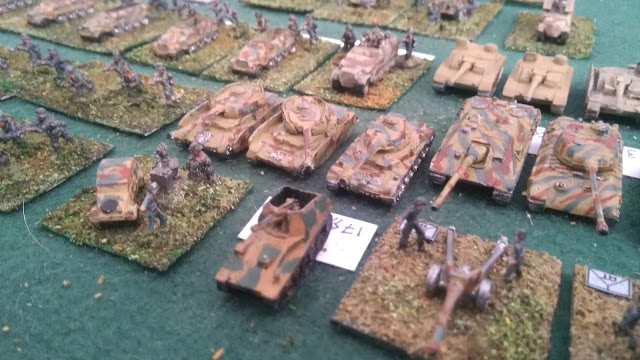 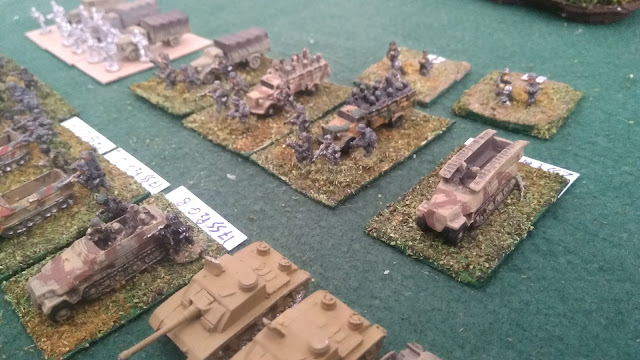 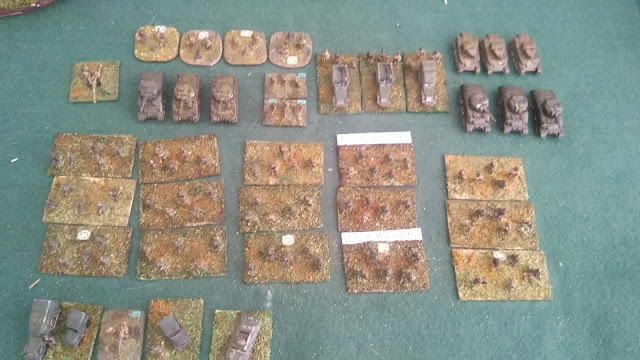 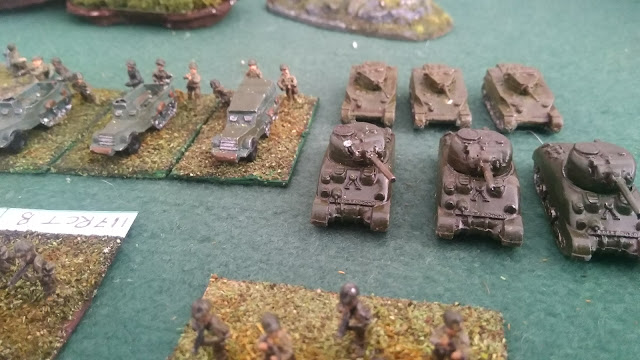 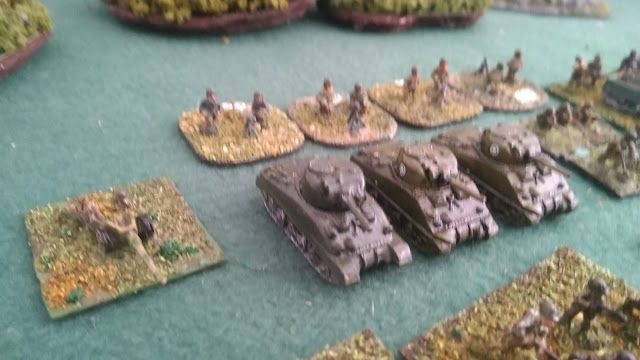 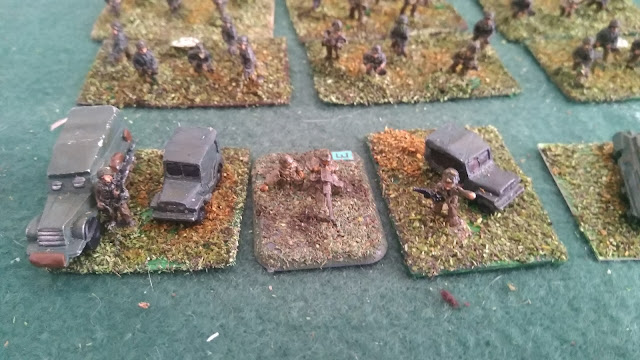 Some additional units and HQ bases, ready for O group.
I'm planning on bringing this lot back to the UK and it should be the basis for some great games.
Posted by Uriah at 16:54 No comments:

In the Summer of 1991 the Petains gathered in Cockermouth (no sniggering at the back there) to tackle the Barbarian Conspiracy.  The Club Treasurer provided the figures in his war office, complete with snazzy wall maps.

The Saturday evening featured a visit to "buy a bottle of wine for the ladies" during the course of which all three committee members became quite hammered, making up the world's longest and most far fetched excuse to explain our absence.  As excuses go it was a resounding fail.  Probably a resounding hangover too.

Some good games though. 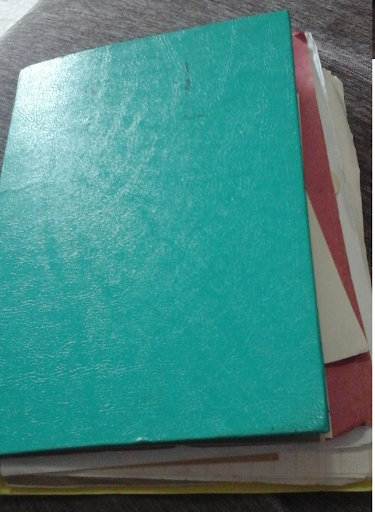 Having talked about classic wargames during a lockdown Zoom this week I remembered that I had a record of most games I've played, on paper, among my obsessive War Journal records.  I dug out one of my oldest journals (the hunt for my 1970/80s journals continue -  maybe in Durham)

The weekend took the form of a campaign, with six armies from/in Britain circa 380AD.  Mr P played the Dux, Captain Q was the Comes, and I, as ever, was the Barbarian. 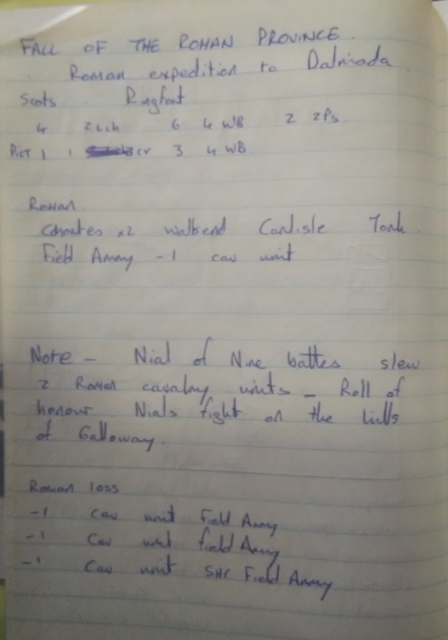 Fall of the Roman Province

Part 1.  The Roman Expedition to Dalriada.

Roman Forces:  2 Cohorts from the Wallsend and Carlisle.  The Field army from York. 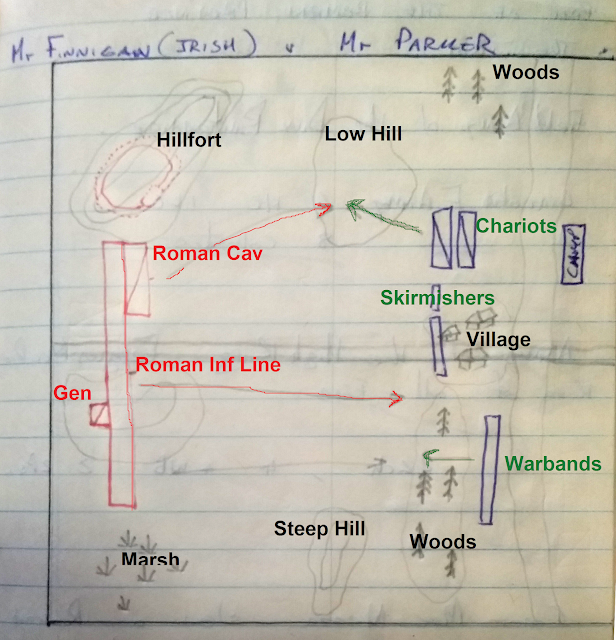 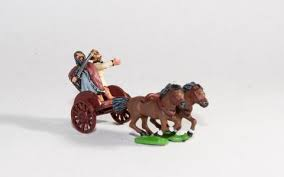 The Roman line came forward, only to find that the chariots had routed their cavalry and were now poised to take them in the flank.  the Irish warband came through the woods and held there, whilst their skirmishers threw javelins from the village in the centre.  The Romans lost quarter of their forces and withdraw.

I named my Irish chief after this as Niall of the One battle.  He is recorded as killing two Roman cavalry units and was added to my Roll of Honour.  The Irish won by destroying the Roman cavalry, establishing an ascendance that was to last the entire campaign.  I seem to remember however that I was allowing them a light cavalry move rather than a normal cavalry move so these boys swarmed around rather unfairly.  Win for the Barbarians. 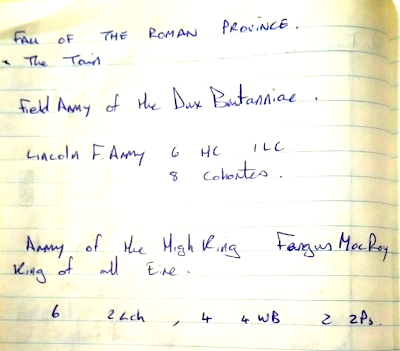 The Army of the Dux Britanniae.
The Lincoln Field Army 8 Cohortes, 4 Mounted Cohorts and a skirmish unit,
vs.
the Army of the High King of the Irish.
6 Chariot units
4 warband and 2 skirmishers 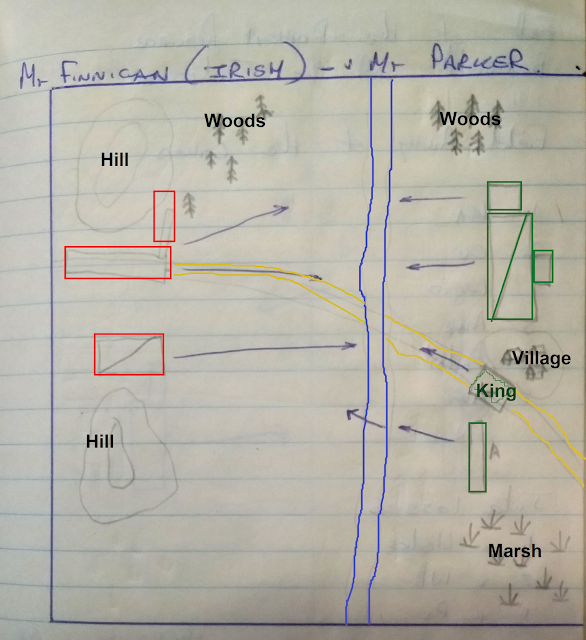 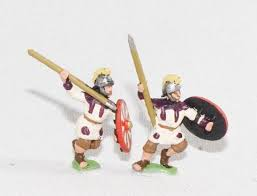 I have a clear memory of this game, charging my chariots down into the ford, won once and was then broken three times in a row.  Not the Irish finest hour, and the King and Nial of the Two Battles were both killed.

Quintus Whitmorus takes the field as the Comes. A thumping game.  I charged the warbands across the table into the teeth of a wall of Romans who then hit my flanks.

The Jutes lost three warbands and a skirmisher unit.  The Romans Lost one.

My war journal has one more terrible tale to reveal.  After the battle The Dux was recalled and executed, and the Comes Promoted to Dux.

The Former Dux was now disgraced, and took command to the Attecotti, Picts and celts, who were pouring over the border.  The New Dux Quintus defended the city of Chester from the Attecotti with his Army of Northern Britania. 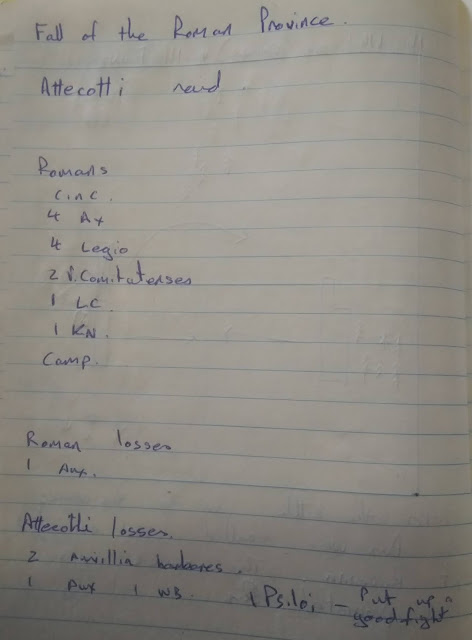 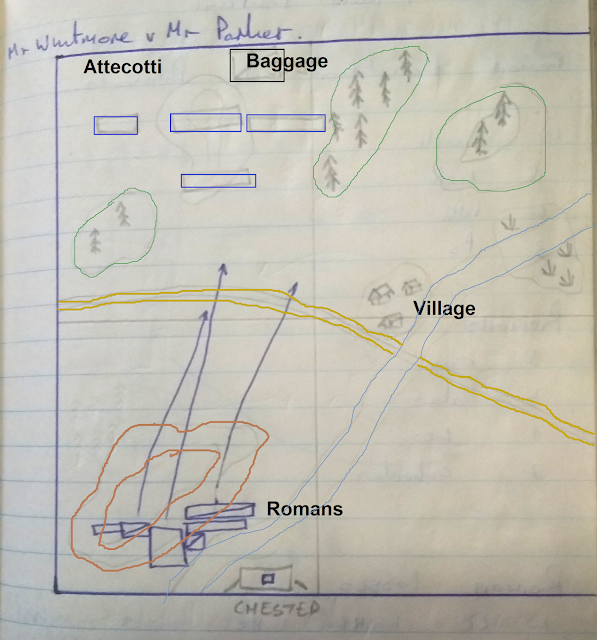 A win for an aggressive Rome, although the War Journal records that the Attecotti put up a good fight. 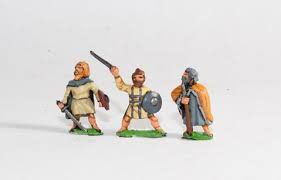 With Britain as the prize the Petains faced the last fight.  A victorious Dux Qunitus, a subordinate Comes Quilpius and the Barbaric Irish Celt now squared off. 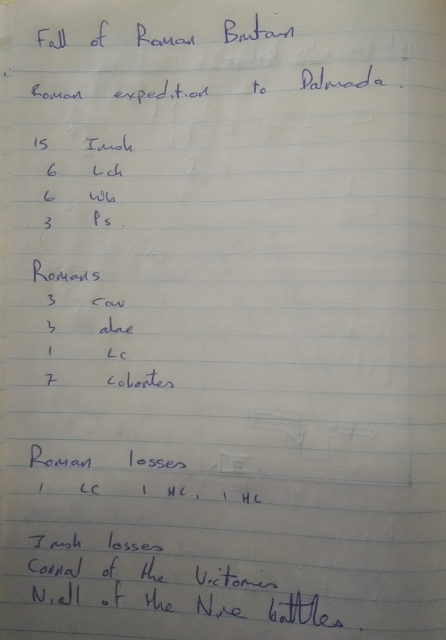 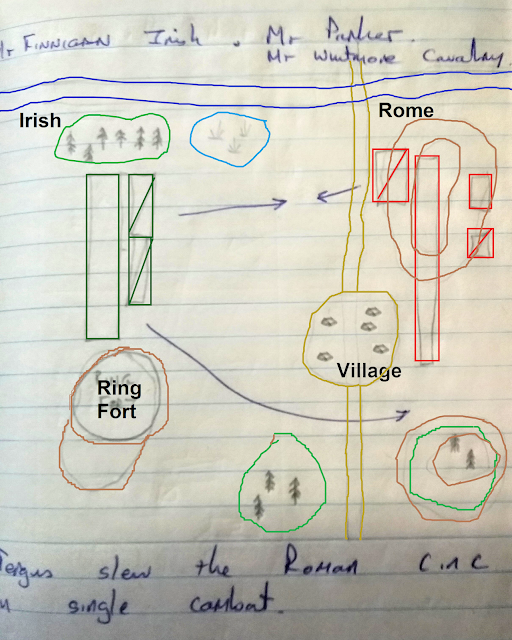 One of those odd battles that could have gone either way. The Roman cavalry put up a fight but then slunk away into the village, leaving the infantry vulnerable, but it didn't matter.  The Roman General was killed, morale collapsed and the Irish swarmed into Britain.

Five games over the course of a weekend in 1991, all greatly enjoyable.

Classic Petain Games 2 will involve the Notorious Transalpina Campaign, WRG 7th, an ambush, and my teddy being flung from the pram in disgust at Phil Barker's "Oh you rolled a 1 for deployment and are being ambushed" rules.

No, still can't laugh about that one...